How can we help you today?

started a topic about 1 month ago

We have recently been alerted to an issue that some subscribers have reported in relation to supporting documentation, which a candidate uploads, missing from automatically generated candidate packs on some vacancies. This was originally raised as a minor incident with Saba.

Following further reports of the same issue this week, the WM Jobs Team has undertaken an audit of recently posted jobs and our findings indicate that the issue is more widespread, however not all jobs are affected. We have been unable to pinpoint when this problem started and we have not noticed any specific common factors amongst the jobs we have looked at. As such, this has now been escalated to a major incident.

If you require any specific support in relation to this incident, please log this via the Service Centre, otherwise we will provide you with further updates as Saba’s investigation progresses.

Please accept our apologies for any inconvenience caused.

said about 1 month ago

Following our notification last week regarding an issue with  supporting documentation, which a candidate uploads, missing from automatically generated candidate packs on some vacancies, Saba still continue to investigate this but have advised us that the issue seems unique to our environment.

Saba are currently investigating in test environments however it is likely that the next step will be to test in both our Sandbox and Live environments in order to replicate the issue and ascertain the root cause.

We will provide you with a further update as testing progresses.

said about 1 month ago

We have been advised today by Saba/Cornerstone that their Maintenance Team has identified that the issue with supporting documentation missing from automatically generated candidate packs on some vacancies is a system defect for which they are currently preparing a fix.

Saba/Cornerstone will update us with further information and a date for the fix to be deployed in due course.

In the meantime, please continue to use the suggested workaround.

We await further clarification on the root cause and the nature of the fix that has been implemented.

Should you have any queries regarding this issue, please raise a ticket via the service centre.

We wanted to update you on an issue that was identified on 10 June whereby supporting documents submitted by a candidate were missing from automatically generated candidate packs. After further communications with Saba/Cornerstone, they have advised that the issue first occurred on 7 May, however, the issue only occurred on vacancies whereby a description for an attachment was included in the application process configuration: 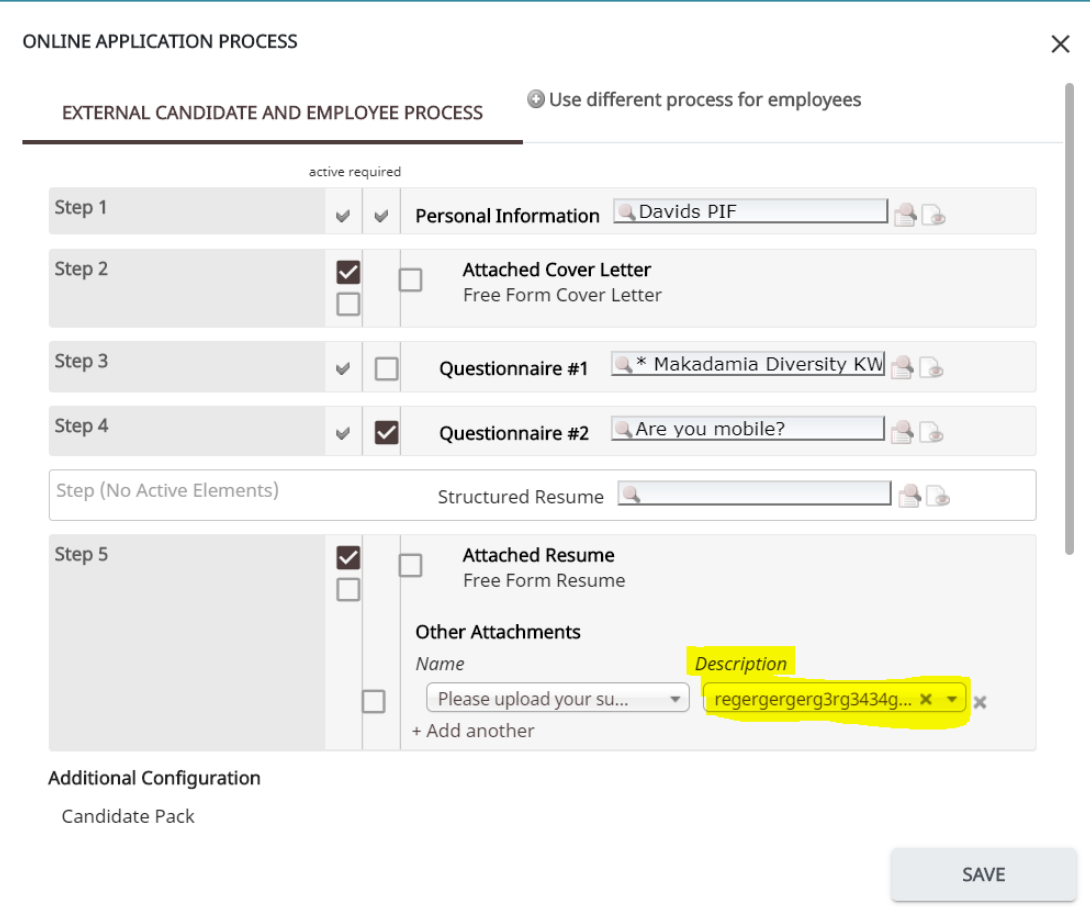 Saba/Cornerstone made some changes to their code to fix the bug and a patch with the fix was deployed on 15 July.

As a result of our continuous monitoring of this issue, we have identified that there are still some cases where the supporting documentation that a candidate uploads is not being attached to the automatically generated candidate pack, which we believe is linked to the configuration of the application process. This has been flagged to Saba/Cornerstone and escalated as per our processes.

We will aim to provide you with a further update once the Saba/Cornerstone investigation is complete.

In the interim period, we advise that you continue to use the previously suggested workaround to manually create the candidate pack via the Selection/Hiring tab and tick in all the documents you wish to see in the candidate pack as we are confident that when using this method, all required documents do pull through.

said about 8 hours ago

We are pleased to advise that a patch containing a fix for the further issue experienced with supporting documents submitted by a candidate were missing from automatically generated candidate packs was deployed to TalentLink yesterday (4 August 2020).

Initial testing of applications received after the deployment of the patch has been positive and supporting documents have been visible in both the automatically generated candidate pack on TalentLink and also in the candidate pack attached to the confirmation email sent to candidates on submission of an application.

We continue to monitor this situation closely and await confirmation of the root cause of this further issue.

In the meantime, should you notice any further issues, please log a ticket via the service centre.

Comments to this discussion are now closed!
More topics in Announcements
See all 19 topics